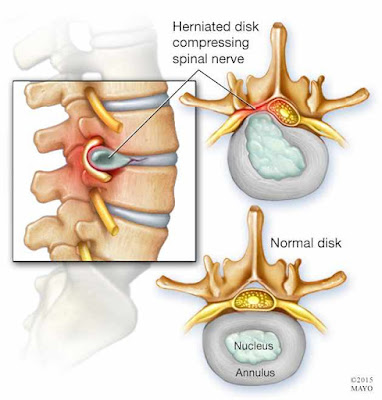 One significant cause for back and neck pain can be a herniated disc.  Between your vertebrae are flat, round cushioning pads called discs.  These discs act similarly to a shock absorption system found in your shoes.  Each disc has a gel-like center called the nucleus pulposus that is encapsulated by a tough, fibrous outer layer called the annulus.  A herniated disc (also known as a slipped or ruptured disc) can happen when pressure from the vertebrae above or below force a part or the entire nucleus through a weakened or torn part of the annulus. The herniated nucleus pulposus can press on the nerves near the disc.  Pain, numbness or tingling are often the effects felt from the pressure on the nerves coming out of the vertebrae and spine.  Herniated discs also cause surrounding inflammation in other areas of the neck and spine.  Current research is highlighting the role of this inflammation and the most effective way to remove that inflammation so that the disc is allowed to heal.  Invasive surgical procedures not only run a large risk they often have low success rates to remove pain from the area and lead to more surgeries for the same issue.
Chiropractic care can stretch the spine and isolate the herniated area with non-invasive adjustments of the neck and spine.  By moving vertebrae, the herniated disc is then moved away from the nerve, reducing pressure off of the nerve root which relieves pain.  Also, chiropractic adjustments allow the nervous system to release an anti-inflammatory substance, which removes inflammation and further relieves pain.
Even surgeons are recommending less invasive, gentle approaches for herniated disc treatment.  It is being discovered that chiropractic care is bringing better long-term results for discs with little to no complications or side-effects.  Improving structure of the spine reduces inflammation which allows the body to heal.  While options for drugs and surgery will always be there, they should be utilized only in emergency situations or as a last resort.  We see incredible results in patients with herniated discs every single day in our office!