Do You Grind Your Teeth? 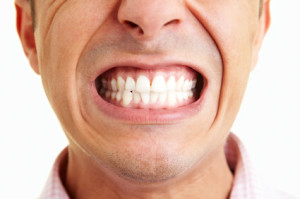 Between 5.9% to 49.6% of children under the age of 18 grind their teeth and/or clench their jaw at night during sleep.  There are significant links found between grinding teeth and other health issues such as headaches, migraines, anxiety, depression, aggression disorders, dental abnormalities and just plain irritability.  Not to mention the high level of annoyance it brings to anyone else who lives with a teeth grinder!  Traditional therapies for this include dental equipment and appliances, and pharmaceuticals, although their efficacy rates are not well known.

However, we do know that subluxations or misalignments of the spine affect the function of our nervous systems.  The nervous system is responsible for the development of clenching the jaw and grinding teeth.  This leads one to believe the positive results available once you remove the subluxation of the spine with chiropractic adjustments.  A study published in the Journal of Pediatric, Maternal, & Family Health in 2017  followed a 9 year old boy who had been a teeth grinder for over 4 years.  His grinding was so loud his parents could hear it from the next room over.  The child also had poor posture, and was not getting high quality sleep at night.

After his chiropractic examination it was revealed that the child had severe subluxations in the neck.  This resulted in the dysfunction of his nervous system and muscle imbalances.  His neck muscles were extremely tight as a result, and all of these symptoms meant poor quality of sleep for the child.  Huge improvements were made after specific chiropractic adjustments to his neck and spine.  He also showed great improvements in his posture, and because his nervous system was allowed to function properly he no longer was grinding his teeth at night.

Posted by Mountain Island Chiropractic at 10:07 AM No comments:

Should I Take a Muscle Relaxer???

It is estimated that 75%-85% of adults are affected by back pain! This pain interferes with all areas of our lives, including recreation, family time, work, and sleep.  Over the counter pain medications such as Motrin, Tylenol, Ibuprofen, etc along with prescription NSAIDS and muscle relaxers often are turned to in hopes of some relief for their pain.

What this proves is that although there is always an availability of medication, chiropractic care and should be used as a first resort in times of pain and trauma.  And although we often seek treatment after injury or pain, the best treatment is prevention!  Seeing a chiropractor for regular care not only can prevent injuries from happening but will shorten the duration and intensity of pain after trauma.